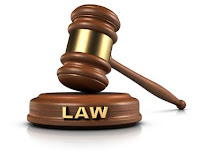 Blackballed by the justice system for corruption, Judge Marcus Cludderman has suddenly emerged phoenix-like from the ashes of his disgrace. He is set to begin filming Country Judge for a major media outlet and has described himself as "more content than a pig in a mud waller."

Country Judge is reportedly completely different from anything else on TV. Cludderman describes it to a Bluegreenplant reporter. "There are a lot of judge shows on TV, but ours is completely different. Ours is so different that it will make all the others look the same." Cludderman grinned. "The public is tired of old ladies, Latins, and your run of the mill street-wise African Americans. Our new show will be revolutionary. In it I will decide cases based on testimony of plaintiffs and defendants, but I will incorporate folksy banter which will brighten that courtroom with the light of a spring day. I won't be afraid to mention Jesus, either."

The show will be taped at KHOG Studios in Mulch Park, Nebraska. It is not known which case will be first on the show, but America and the world, through syndication, is eager to find out!
Posted by bluegreenplant at 6:30 PM 1 comment:

Billy Plimberton Gets into Scuffle While Posing for Mugshot

When Patrolman Danny Perkins politely asked Billy Plimberton, the too-big-for-his-britches leader of the Naptimez Ova! street gang, to remove his sunglasses for his mug shots at the headquarters of Mulch Park Police Department, Plimberton refused and had to be tazed.

"Suspects used to cooperate, now they don't. They just want to make every decision and they expect everyone to bow down to them," said officer Perkins. "I blame it on faulty parenting. Kids are spoiled and they grow up into  adults with a sense of entitlement."

The reporter was about to ask a question, but a piece of gum lodged for a moment in his throat.

Plimberton jittered on the floor and tried unsuccessfully to pick up the loose change which had scattered out of his pockets when he was electrically writhing on the the blue speckled linoleum tile.

The sunglasses were confiscated as evidence.
Posted by bluegreenplant at 6:34 PM 1 comment:

Nebraska circuit Judge Stanford G Dolenger has issued an arrest warrant for Billy Plimberton, the leader of the street gang, Naptimez Ova!, for stealing a pair of sunglasses at a rest area on the outskirts of Mulch Park.

"We got an APB and a BOLO and a salad during our lunch break," laughed a Mulch Park Police officer who held his hand over his name tag during an interview with Bluegreenplant. "Are you kidding me?! A warrant over a pair of sunglasses? The judge who issued that is stupider than Judge Cludderman."

The Bluegreenplant reporter then pointed out that Naptimez Ova! may very well be in town to hunt down and murder a beloved Emmy winner in cold blood. The reporter bent down and squinted, "What is your badge number?"

The officer quickly covered his badge, too. "No further comment," he suddenly sat stone-faced.

But it was too late. The Bluegreenplant reporter had seen the badge. Number 0731, Patrolman Danny Perkins.
Posted by bluegreenplant at 6:44 PM 3 comments:

The thuggish youth gang known as the Naptimez Ova! has been spotted in a highway rest area on the outskirts of Mulch Park. The leader of the gang, Billy Plimberton, posted selfies on Instagram under the hashtag: "#IT'S FATHERS' DAY!"

This grim homecoming has led more than one weary traveler to mumble into his burger and a shake that something bad is bound to happen. Marcus Cludderman, a former judge, driving a two-wheel drive Cadillac Escalade with 33 inch gumbo mudders, observed, "I just know that those young people are here for revenge. I used to watch that TV show, where their so-called poppa made so many promises to those kids. He used to read to them from the Bible, for God's sakes! Then he just up and abandoned them when he got a better offer. Those kids are young and nobody can hold a grudge like a youngster wronged. I seen it in my work. Hell hath no fury like a youngster traumatized."

The Bluegreenplant reporter suddenly realized that he was interviewing an infamous local celebrity. "Judge Cludderman, what other insight can you give us, based on your experience?" he asked.

"I mean, after they kill him, they'll bribe some sorry-ass-judge and get off scot free!"

If the readership will forgive a little editorializing, Marcus Cludderman should know what he is talking about. He was recently unbenched after a scandal involving bribery and the fertilizer spreader industry. He currently has procured an agent and is on a crusade to challenge the naysayers and demonstrate that he is, "still a force to be reckoned with." He is peddling a reality show called Country Judge, starring himself. He'll tell anyone who will listen about how he is re-imagining himself.

Cludderman continued talking about his new show, but suddenly, a ruckus was heard on the far side of the rest area. A shopkeeper rushed into the breezeway. "Hey, that guy stole a pair of sunglasses!"

"Who me?" responded a guilty-looking man.

"No, not you," shouted the shopkeeper. "That guy." He pointed.

It was unmistakable. Billy Plimberton  glared back at the merchant, adjusted the sunglasses, got into a black Kia and burned rubber--with fury.

Acting on a hunch, Bluegreenplant cross referenced records at the DMV and learned that Nebraska has absolutely no record of anyone named Billy Plimberton with a driver's license.
Posted by bluegreenplant at 7:01 PM No comments: