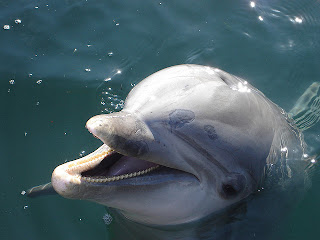 Jerik the Dolphin Trainer got some unplanned negative reinforcement when he gave his co-star, Puncheon Seven, the wrong command during rehearsal. Trying to give the robot dolphin a command to flip, he accidentally gave the signal for Bite me. There was no audience at the time to witness the blooper, but several videos of the accident are available on YouTube.

"It's funny cause he panicks!" said webmaster Jeff Johnson, who watched it again and again as the rubber and steel whale clutched his co-star's hand and refused to let go. "He couldn't give the command to let him go cause he needed two hands to give that command! Ha-ha. It was so funny!"

Due to possible scarring, shooting for the new smash-hit movie has been postponed two weeks. In a recent televised interview, Barwell insisted that he bore no ill will towards his co-star and said that he was happy because this new schedule will give him a chance to spend more time in Mulch Park with his adopted orphan kids on his TV Reality show.
Posted by bluegreenplant at 8:50 PM 15 comments:

Barwell Phoning it In

An online petition campaign to get rid of substitute father, Neptune Cornwalsh, is gathering steam and advertisers have taken notice of fans displeasure. As star Clift Barwell has missed more and more episodes of the Children Who Need Help Golden Dome Orphanage in favor of other projects, such as big time movie deals, the show has relied more and more on neighbor Neptune Cornwalsh to step in and take the part of father.
Cornwalsh, who happens to be the nephew of mmmmm Cornwalsh, the president of television, has been panned by critics and was described by the website Benjie'sBombs a "half assed foster parent." Benjie went even further in his online review by insisting that Barwell chose Cornwalsh specifically because he wasn't a threat to replace Barwell.
Crew members of the show have mentioned that with Barwell's spotty attendance, the children are not showing up on time for shooting important video segments. "Those kids don't respect Cornwalsh. They are all over the place. God knows where they are."

Writers have been instructed to address the problem and are planning to include a segment where Barwell calls the orphans with a video call and scolds them with an inspirational yet scolding lecture about the responsibility of showing up on time.

Posted by bluegreenplant at 9:31 AM No comments:

The seeds of a grassroots Campaign to assure the renewal of the Children Who Need Help Golden Dome Orphanage have germinated and TV executives have announced that the program's continuation was never in doubt. "Why would we cancel the show if it is at an all time high in the ratings? That would be stupid. And TV is not stupid, I assure you." said Dan Wilshire, producer of several award-winning reality shows. "We have  so many sponsors clamoring for airtime the we have had to cut an additional three minutes from the show for the second time this year to accommodate all the advertisers that the public needs. Sure it's a cash cow, but more important for me is the moral message of the importance of love and family that the show conveys, " he added as he winked to someone off camera.

Portia Lenninger, the teen who orchestrated the on-line campaign to keep the popular program, which chronicles the billionaire children in an orphanage and their dedicated movie star parents, insisted that the campaign had an impact on saving the show. " If it wasn't in danger of being canceled, then why were so many people so worried about the possibility of it being canceled?" She pointed out that the blogoshhere of the internet has been boiling over with concern that doo. Ed to cancelation and syndication after Wilshire ws overheard in a Burger King Restaurant saying on his cell phone that nobody would notice if they just kept showng repeat episodes.

Perhaps Portia's strongest motivation for her campaign became clear when Tha interviewer asked her about her opinions about the characters on the show. "I am the same age as Billy, so it feels like we have been growing up together. I think I am in love with him."

Next season marks the shows fifth season.
Posted by bluegreenplant at 8:13 AM No comments: