The Children Who Need Help Charity has threatened to sue billionaire investor William Towelamp, who is said to have doubled his investment in Bluegreenplant when he bankrolled a prize-winning Blue Green Power Plant Commercial, which brought in a flood of capital. Unfortunately Towelamp may have possibly misled the public with a tiny fib. He had promised a portion of his profits to the charity, but the kids ended up with zilch.

"I am really sorry," stated Towelamp. "After taking my cut, a modest profit, and paying for rental of equipment and studios to my subsidiary, we actually were slightly in the red. Production costs are sky high nowadays. In the spirit of our deal, I sent to the charity exactly what was due."

Little Billy Plimberton was hoping to receive a check in the mail to help him buy milk at school. Instead he got a shocking surprise. "I got a bill. I couldn't believe it. Me and some other kids each owe Mister Towelamp a hundred dollars!"

One of the nuns at the orphanage corrected the little tyke, "A hundred and sixteen dollars, sweetheart." Billy started to cry and Sister Jessica comforted him by telling him not to worry and by suggesting some kind of a fund raiser to pay the bills. "When the door slams in your face, rejoice because God always opens a window," she cooed.

Little Billy Plimberton choked back the tears and put on a brave face. "I'm going to go out that window and I'm gonna get a lawyer because this isn't fair!"

In the interest of full disclosure: When this news service, The Blue Green Power Plant, went public, William Towelamp bought 51% of the shares. Not to worry. Bluegreenplant vows to answer only to the public, not shareholders.
Posted by bluegreenplant at 9:01 PM 10 comments:

Police unions in most US jurisdictions have agreed to work overtime this weekend to fulfill anticipated security and crowd control needs at the upcoming, unprecedented sale at Towelamp's.

Dressed in a dapper, made-to-measure Hugo Boss suit, Sir William Towelamp appeared for throngs of press cameras to reassure the public that there would be plenty of two-for-one coupons for all who arrived early enough for the sale. "I know that these bargains all sound too good to be true, but let me assure you that they are the real deal," read Towelamp from a prepared statement. "I want everyone to know we have our employees working triple overtime to serve the public and your buying experience will be as easy as pie."

The first to applaud the statement was a group of twenty-somethings who had staked out a camp spot in front of Towelamp's three days earlier to make sure that they were first in line for the grand event. When asked what he planned to buy, one man, who was doing bicep curls with a set of dumbbells said, "A lotta towels!" A woman accompanying him, who appeared to not be wearing a brassier, added, "And shelving for the towels, of course." The young couple pointed out that it was great fun to camp on the sidewalk in spite of the car exhaust and they felt good about their upcoming purchases because part of the profits were for charity.

Aside from high quality towels and shelving at ridiculously low prices, Towelamp's also specializes in T-shirts and various sundry items.

This Bluegreenplant reporter promises to be there at the opening bell to cover the story, and maybe to cash in on some very tempting low prices, lower than Towelamp's everyday low prices!


Posted by bluegreenplant at 6:34 AM No comments:

Last night, a champagne and pretzel fueled awards reception at the Mulch Park, Nebraska Marriott, christened a new chapter for the Blue Green Power Plant. A flashy IMAX video introduction of the new CEO, set an energetic tone, highlighting how Sir William Towelamp has overcome obstacles and sacrificed tremendously in his life-long crusade to accumulate billions of dollars. As the video came to an end, Towelamp suddenly appeared in person by lowering a long, vertical zipper and passing through a slit in the screen. "It's hot back there. Does anyone have a towel so I can wipe my forehead?"

Laughter ensued, as if everyone were in on the joke.

He raised a martini glass towards the audience and toasted a commercial he recently bankrolled as the winner of this year's Oscar Steven's award.

But this reception was not about the Oscar Steven's Award. This ceremony was for the Pluitzer Prize to honor the top-notch reporting of the Bluegreenplant journalism staff in the category of reporting on stories that other news outlets lacked the guts or forethought to cover. Wary reporters from the sole nominee, skeptical of the new management, sat cross-armed and ready for a little editorializing about free expression and Towelamp's not-so-secret plans to influence the news cycle.

"I am pleased," stated the billionaire investor, "Now they have to give me more say-so about what news to cover. Am I right or am I right? Of course, I am." He downed the martini in two sips.

The four Bluegreenplant reporters represented the formidable Bluegreenplant journalistic force which covers all four corners of the globe. These four reporters: Bill Dafferty, Tabby Lane, Bill Duckton (by remote presence device), and Angela Ramos quietly clutched their notes and awaited their opportunity to accept the award.

But aside from a pointing finger and a couple of platitudes about how they were the best, nothing more was offered to give them as an opportunity to address the public. When the writers stood up to accept the award, Towelamp waved at them to sit down and said, "I've got this." Towelamp just kept talking. "Thank you for this award. In celebration, The Blue Green Power Plant has decided to share a portion of its profits with The Children Who Need Help Charity."

A booming applause served as a crescendo for an evening of goodwill and celebration. As cameras panned the audience, the four journalists uncrossed their arms and joined the extended ovation for generosity.

When technicians finally got the jammed applause sign to turn off, a momentous tone hung in the air. The speaker somberly added, "Subscribe to The Blue Green Power Plant, not because I own it, but to help the children."
Posted by bluegreenplant at 5:38 PM 5 comments: 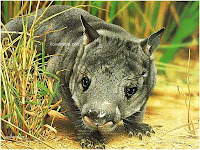 Both of Hector Chin's ex wives are contemplating legal action for the custody of Pooch, the dog who came back to life.
"He's not my dog, so they can't sue me for him," stated Hector Chen over the phone in a conversation with Bluegreen Plant reporter Tabby Lane.
As if on cue, the cute little canine gave Mr. Chen a huge-tongued sloppy kiss, demonstrating tremendous appreciation that only a dog could show.
Picture: Pooch frolicks in the garden of the park near Hector Chen's apartment.
Posted by bluegreenplant at 7:16 PM No comments: