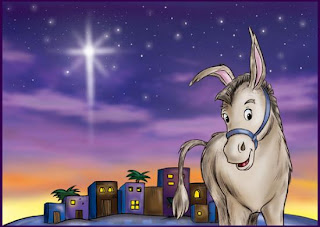 The Odd Prowler announced today on The Blue Green Power Plant that Christmas can be celebrated after all. When the general public insisted that to celebrate Christmas would dishonor the memory of the Paraguayan Scientists who perished sadly in the volcano, The Odd Prowler let out an awkward guffaw and said, "You mean these guys?" and gestured to two statues of lava, which bore uncanny resemblances to the dearly departed scientists.

A hush was heard throughout the trailer where the briefing was held.

Then the Odd Prowler continued in impeccable English, "They fell down into the Center of the Earth. We caught them. They are safe and sound."

Then a little girl, the daughter of one of the camera operators, said something in a tiny, high voice, "How can they be still alive if they are in rock statues." Out of the mouths of babes....

The Odd Prowler handed her a Baby Ruth bar and scruffled the hair on her head. "Don't fret little one. It is just like carbonite. We will crack them open with a hammer and they'll be ready for a celebration because Christmas is back!!!!!!!

With the announcement, the Dow Jones Industrials shot back up to pre-cancellation levels.
Posted by bluegreenplant at 8:05 PM 6 comments:

Scientific voice print animations were run through an anemometer in the lab at Charles Berkeley Labs in order to nail down the producer of the gruff voice which canceled Christmas on Earth within the past 48 hours. "This computer machine is state of the art. It will get down to identifying where those sound waves came from, ha ha ha," stated Charles Berkeley as he turned some dials. "I sympathize with those scientists who fell in the volcano. I once burned my hand in simulated lava and it hurt like a..."

Just then some beeping started and Dr. Berkeley excitedly grabbed a tongue of paper which extended from a slot in the machine. "Oh, my. It can't be," he uttered with disbelief.

The reporter for the Blue green Power plant requested specification. "CAn't be whom?"

With one hundred percent accuracy, that voice has been identified. Christmas was canceled by...The Odd Prowler!" Just then the doctor became faint and needed a Cup-o-soup.
Posted by bluegreenplant at 1:04 PM No comments: 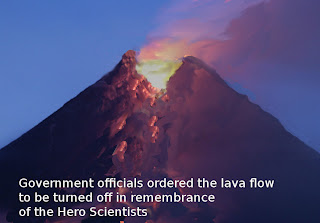 "It is no time to have any kind of gift-giving, dancing, feasting, caroling, or contributing to charity events. Christmas is officially canceled," a gruff voice announced through simultaneous media outlets. "In place of the traditional holidays, residents of Earth are ordered to stay home and mourn the two Hero Paraguayan Scientists, who tragically tipped into a lava-spewing volcano." The voice appeared in all the countries of the world on all the televisions and radios that were turned on. "You are ordered to stay home and eat nothing more than popcorn, their favorite food."

"The voice had a slightly biblical accent," reported Tillie Tottington, a Broadway actress who knows more than three-hundred accents.

Starry-eyed tots and merchants stood with their mouths agape at the powerful announcement as parents and other consumers nodded in agreement and headed for their respective parking lots.
Posted by bluegreenplant at 9:14 AM 1 comment:

A hero squad of crackerjack mercenaries sent by a private security firm in the USA accidentally toppled the limousine with two famous scientists into a volcano when it maneuvered to rescue the trapped Paraguayans.

"Shit shit shit," said Sir William Towelamp, the head of the security firm. "I knew I would have been better off with Canadians!" He really looked upset as he pounded his fist like a overtightened ball of meat on the fiberboard podium. A microphone squeeked and reporters shuddered.

On the streets of Asunsion, the previously planned welcoming ceremony will be changed to a funeral procession.

"This is a sad turn of events," stated Bill Duckton, who came out of seclusion to comment.

Everyone is sad.
Posted by bluegreenplant at 8:04 PM 3 comments: