A CIA agent posing for over twenty years as a llama farmer in Iquitos, Peru has suffered scratches and severe embarrassment after the outhouse he was using was smashed into smithereens by the same reverse meteorite he had photographed attacking a limousine containing two Paraguayan scientists.

That story was reported in a previous Bluegreenplant story.

"I couldn't believe it," said his native Peruvian butler. "It was tenacious, obsessed, almost as if it was angry at him. I know it sounds crazy, but there seemed to be an intelligence behind it. The crazy flying rock kept on attacking until my boss ran into those piranha-infested waters which, by the way, is a tributary into the Amazon."

So far Agent Tollenger is still missing.
Posted by bluegreenplant at 6:33 PM 6 comments: 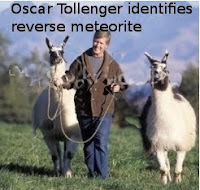 The Peruvian limousine which fancily shuttled the two Paraguayan scientists who were deported by the United States for soliciting a job at a fast food place, was attacked by an object which was eventually identified as a reverse meteorite.

"Holy f****!" said a bystander who saw the whole thing. "Just don't use my name or picture cause I don't wanna get on that d**** thing's bad side! No pictures man!" said Oscar Tollenger of Iquitos Peru as he waved his hands in front of the camera.

Raw video taken by Tollenger with his cell phone suggests that it may be the same reverse meteorite that attacked the plane the scientists were riding in.

The Peruvian limousine is now upside down and on the edge of a volcano opening.

It seems as if the scientists are in peril.
Posted by bluegreenplant at 10:38 PM 5 comments: 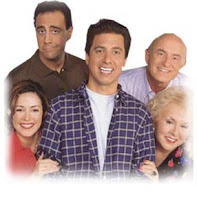 It looks like the two Paraguayan scientists whose plane crashed in the Andes Mountains will arrive in their homeland in style. A Peruvian limosine service has volunteered to shuttle them through the Amazonian Basin and across the vicuña-sprinkled plains into Asunción, their capital city.

"We've been through a lot," said the taller of the two scientists. "But we are proud of the work we have done."

Then the shorter scientist nodded.

Before they got in the fancy limo, they were asked for a final statement and they both shouted in unison: "Everyone Loves Raymond sucks!"

The vehicle sped off on a bumpy cloud of dust before the reporter, who rolled his eyes and shook his head, could correct them. It is Everybody Loves Raymond.
Posted by bluegreenplant at 7:41 PM 7 comments:

A Russian university student procrastinating his studies has been credited with possibly saving the lives of two hopelessly lost scientists who fled into the jungle after being shot at by Colombian troops in a case of mistaken identity. They found themselves in the jungle after their deportation plane crash landed after being attacked by a reverse meteorite.

Ivan Sunavivich spotted the panickers sprinting across a clearing in the rain forest--and still wearing their headphones from their first class seats on the plane. "I was messing around with the Google Earth when I saw them." He tapped his pencil on his face in an idiosyncratic gesture. "I saw them running and knew it was those guys I read about on the Bluegreenplant. I immediately called the Paraguayan Embassy and the janitor told me that a rescue was in the works." He smiled. "So I guess I am a hero."
Posted by bluegreenplant at 8:40 PM 4 comments: