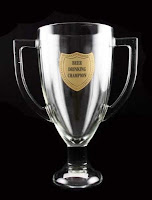 In sharp contrast to the wild antics last year's celebration party, Bill Duckton's congratulatory party consisted of only three people this year. Yes, you heard me right. Bill Duckton has deservedly won the Pluitzer Prize for the year 2009.

It is his second Pluitzer prize in the same number of years. Judges were dazzled by his first-hand reports from the Center of the Earth, which told a tale of how confusion and fear of the unknown evolved into a welcoming embrace from one people to another and eventually a great friendship between him and the Odd Prowler.

Bill Dafferty hosted the congratulatory party. He stated, "This is truly exciting. I have invited over three hundred people to the party." His statement was perhaps a lie.

Of the people who showed up at the party, Bill Dafferty and Bill Duckton were joined by Manny Spencer, an engineer at the Spoonbill's Landing Condiminums.

We congratulate Bill Duckton, our two-timer! We are proud of you.

The Axe Falls on Bluegreenplant Reporter

Because of budgeg cuts due to the economic situation, and because the Blue Green POwer plant has vowed never to charge its readers for blog content, staff has been reduced to two reporters, Bill Dafferty and Bill Duckton, and they will have to share the same office.

We are sorry to say that Angela Ramos and Tabby Lane have been let go. The decision had nothing to do with the fact that they were female, the ones who were let go.

Also let go was a male poofreader, so no sexism nor favoritism was involved.

It was suggested that maybe they could sell Mary Kay until the economy upturned.
Posted by bluegreenplant at 11:42 AM 8 comments:

Ex-Reporter to Get Free Psychiatric Evaluation

A school counselor from a local middle school in Miami-Dade County has offered his services to evaluate Angela Ramos, the Blue Green Power Plant reporter who has been lost in the Center of the Earth for over a year. Co-workers have reported her as being "grouchy and touchy" ever since her return.

"She seemed especially irritable when informed that she no longer has a job. She refuses to accept that the economy took a downturn while she was gone and she was the first to be laid off," said Mister Morton, school guidance counselor and future PhD candidate. "This is a textbook case of denial."

Mr. Morton will be paid a stipend of $100.00 for his assistance with Angela's case. He will get an additional $50.00 if she tells him whether she saw the Odd Prowler on her way out of the Center of the Earth.
Posted by bluegreenplant at 7:25 PM 3 comments:

Angela Ramos, the Bluegreenplant reporter who was either thought lost forever or forgotten, and then suddenly reappeared on the surface of the Earth, has given her first interview to explain her ordeal.

When the reporter from a blog called "Discount Calcium Tablets Provide Virility" raised his hand and asked the third question about the Odd Prowler, she hit the ceiling.

"What is this? Why don't you ask about me? All you guys ask about is this Prowler? Holy shit!" And then she stormed off to a waiting Blue Green Power Plant shuttle van driven by Bill Dafferty.

She told a gas station attendant later that she was "pist off" because nobody asked her if she was OK. Everyone wanted to know if she had seen the Odd Prowler on her way up.

She still hasn't answered the question about whether or not she saw the Odd Prowler.
Posted by bluegreenplant at 11:07 PM 3 comments:

Angela Ramos, the Blue Green Power Plant reporter who disappeared a long time ago when she went to the Center of the Earth to Rescue Bill Duckton, a colleague who she thought was lost, has appeared on the surface of the Earth. She met a weeping mob of humanity who was mourning the loss of the Odd Prowler, even though he is not dead.

"She looks great. She is not even pale," said one witness.
"I was sure she was dead," said another. "It's a miracle."
"She should go back down there and get the Odd Prowler back. He was such a nice guy."

After consuming Coca-cola and Saltines with paramedics, she promised to give an interview to reporters soon. The press is eager to find out what she has been doing all this time in the Center of the Earth, and whether she saw the Odd Prowler going down as she made her way up.
Posted by bluegreenplant at 7:44 PM 4 comments: