Duncan D, amateur rap and graffiti artist, has posted on his Myspace page, a photo of William Towelamp sitting atop a huge pile of money and laughing harshly. Duncan wrote, in his street-cred dialect: "De dawggg gotz t' mezza pong dalla fo dat e-kon-oh mee." Duncan, a native of Cardiff-by-the Sea, California, lives with his parents, an investment banker and a homemaker, who are having a rough time since the economy has hit the skids.

Towelamp has responded to the embarassing criticism with his own, laconic, one-line post: "I am going to soak a wad of money in water, freeze it solid, and then nail that sonofabitch's forehead when he goes up to accept his Grammy award, cause all the shittiest ones win a grammy!" He posted as a response to the Myspace posting, which has since disappeared from cyberspace.

In other news, nobody seems able to figure out who the odd prowler is and Bill Duckton is still taking taxis.
Posted by bluegreenplant at 4:02 PM 11 comments: 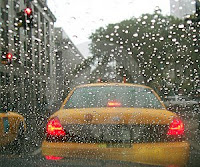 The Odd Prowler left the emergency room at Metropolitan Hospital Two with his arm in a sling, but no lawyers approached him to encourage him to sue the jail for the fiasco and stampede where he was injured.

When asked if he was planning to sue, the Odd Prowler spouted off a bunch of gibberish and then was rushed off into a taxi by an obviously flustered Bill Duckton. Rain began to fall in droplets as the bold reporter jammed the microphone through the up-going window like an ice cream cone offered to a diabetic kid with just enough time for one question. The brave and good-looking reporter asked, "Congratulations on your Pluitzer Prize. And what exactly is going on here, Mr. Duckton?"

Duckton rubbed his unshaven chin and shouted unnecessarily loudly into the mic, "My car was stolen while I was in the Center of the Earth and now I have to take this taxi."

When it rains it pours.
Posted by bluegreenplant at 7:32 PM 4 comments:

Murphy's Law prevailed at the Bill Duckton World Wide Web Interview, A Chat With the Superficials, in what can only be referred to as a total fiasco!!!

Then, when Duckton was just about to dramatically introduce the Odd Prowler, he gestured to a hole in the ground at the County Jail and a rabbit popped out of it.

"It was utter chaos. Everyone focused on the rabbit and the Odd Prowler got stepped on by a camera crew. Then someone noticed that the rabbit had a human foot and any remaining semblance of order was lost. I got scared," commented Malachi Plopkin, an out of work rabbi who was situated in a nearby cell due to a trumped-up pickpocketing charge.

The rabbit panicked and disappeared down the hole again.
Posted by bluegreenplant at 11:36 PM 8 comments: