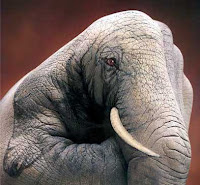 Trixie, the elephant at the Kit Carson Wild Animal Park in Johnstown, Tennessee, went crazy when her trainer started adding new mulch to her enclosure.

"She picked up the man with her trunk and he flew over, over, over and landed in the tigers' place!" said little three-year old Timmy Tomblinson, the only witness to the horrible accident. "The whale (sic) got so mad when he dumped garbage (sic) around the cage (sic)," he wimpered traumatically.

The Blue Green Power Plant reporter tried to get more details, but the child was whisked away by his impatient parents, who looked too young to raise a three-year-old.
Posted by bluegreenplant at 6:56 PM 2 comments:

A group of teenagers got lost and were unable to find their homes even though they lived only one block from the playground where they were last seen. Timmy Clampton and Callie Tipton were picked up on the outskirts of their hometown in Borneo, Ohio, where they attend Borneo High School Adjunct.

The police officer who rescued them said, "They didn't seem to be on drugs or nothing. They were just weirdly lost, like a homing pigeon who has accidently flown smack dab into a cars windshield and survived, shaken and embarrassed."

A scientist from California offered another explanation for the odd occurrance: "The playground was just lined with mulch from that giant South Carolinian Tree. The magnetism in the mulch must have messed up those kids inner compasses. The parents shouldn't punish them for curfew violation this time."

In spite of the scientist's warnings, the playground remains open.
Posted by bluegreenplant at 5:13 PM 3 comments:

The ancient tree whose branches revealed a mysterious skeleton, once believed to be that of the mythical Bill Duckton, has been ground up into mulch and is being sold in home convenience centers and on Home Shopping Network.

Sandra Ponmingontl, who played Carrie on the popular sitcom "Cheers," has been singing praises of the mulch. "It works wonders on alkaline soil," she touted, "That is why I let them put my picture on the bag."

When it was reported by reporters to a public official of the state of Nebraska that a Squatter had built a hotel on a public highway with the intent of opening it for business, the official stated, "I don't care. That is all wasteland out there anyway."
Posted by bluegreenplant at 10:44 PM 6 comments:

A hobo-type character describing himself as a "renaissance man," has built a motor hotel on Interstate 80 in Nebraska. The hotel, made of sod and animal dung with glass windows, has yet to receive any guests, but the unnamed "renaissance man" is confident that he will eventually get some business. He said, "All this land belongs to nobody. Well I hearby declare that I am nobody and this is my nobody empire. Take this voucher for a discount."
Posted by bluegreenplant at 8:59 PM 1 comment:

In contrast to the effusive mood he demonstrated only one week ago, Bill Dafferty sat stoically in a euclid green faux leather chair as the members of the board of directors of The Blue Green Power Plant scolded him for inventing the personage of Bill Duckton, a reporter who never existed.

Astute reader, Julius M. Horkner, pointed out that a previous Bluegreenplant article documented the sham in detail, about Dafferty making up Duckton in order to collect more paychecks, get a corner office, and win the Pluitzer Prize.

Dafferty admitted that it was wrong to lie and said that he was sorry.

The Blue Green Power Plant salutes Bill Dafferty for his honesty and candor. It takes a true man to admit when he is wrong.
Posted by bluegreenplant at 4:33 PM 6 comments: 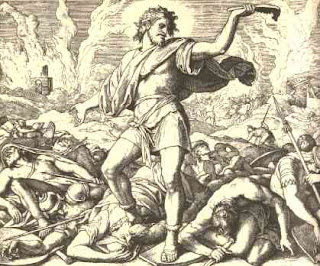 The possible jawbone of Bill Duckton was located accidently when a Mrs. Billy Cardamon of Sea Hills, Kentucky, sat down to do some weeding in her garden. "I sat down and wham! That thing came up and bit me! I was screaming in pain, afraid of finding the rest of the corpse, then I remembered I read about this on the innernet (sic) and called the authorities from the university."

It was a dog resembling Mrs. Cardamon's that was last seen running away with the jawbone. Researcher were very grateful for the return of the mandible and they bought an ice cream cake for Mrs. Cardamon as a token of gratitude.
Posted by bluegreenplant at 6:37 PM 9 comments: