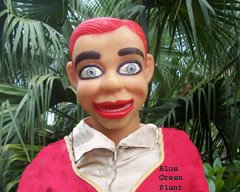 The Blue Green Power Plant now has a face, someone reassuring and fresh and affable, just like the team we have stationed around the globe, finding the news that other outlets choose not to share. We hope you like our logo.
Posted by bluegreenplant at 7:55 PM 2 comments:

William Towelamp, an American man living on the streets of Ottawa, Canada, has made a fortune selling T-shirts and towels with the image of Hecot Smithly, the man who was absorbed by a towel, on them.

Towelamp began his business using computers at the Ottawa Public Library. Said Towelamp, "This is my little contribution to society. I am ending homelessness on some level. Ha ha."

When contacted for comment, Hecot Smithly was unexpectedly passive. He said, "I am just trying to get my life together. Are you sure that is my picture on the towel? I don't get it."
Posted by bluegreenplant at 7:32 AM No comments:

A restraining order against Hecot Smithly and filed by Dr. Reginald Gamma was declared null and void by a real judge after investigations by this press crew revealed that Milo Ottenger, a vagrant, had donned the robe of an official judge of the government of Indiana and "was having a good time" pretending to be a judge. During the three weeks that Ottenger played judge, he condemed 5 people to death and 3 were executed. Also, a lawsuit against a Wal-Mart executive who had suggested marketing a tastless towel with the image of the man who was absorbed by a towel on it, was dropped. That lawsuit was filed by Margot Smithly, before her divorce with Hecot Smithly, the man who was absorbed by a towel.

Hecot Smithly is now living with Maggie Price, a woman who claims to have saved his life when he was trapped in the towel.
Posted by bluegreenplant at 10:08 PM 1 comment:

Dr. Reginald Gamma, the doctor who has amnesia so he doesn't remember that he is a hero, was released on bail. Bail was posted by Hecot Smithly, the man who was unabsorbed by Dr. Gamma from a towel.

Before leaving the courtroom where bail was posted, Dr. Gamma approached the judge and requested a restraining order, "because that man (Smithly) was stalking" him.

The restraining order was granted by Judge Milo Ottinger.
Posted by bluegreenplant at 10:00 PM No comments:

All Hell broke loose at a press conference which was hyped as a celebration of Doctors helping patients. When a spokesman presented Hecot Smithly, the man who was absorbed and then extricated from a towel, to the public, he gratefully thanked his doctor. When Smithly tried to embrace his doctor, Doctor Reginald Gamma, the doctor belted him in the face twice with his fists.

After being picked up off the floor and escorted into the emergency ward for treatment, Smithly said, "First he saves me, then he sucker punches me!"

Gamma left the scene and reporters have not been successful at locating him. A hospital spokesman warned the press and general public to be careful if they encountered Gamma because he "Doesn't know who he is because he has amnesia."
Posted by bluegreenplant at 10:37 PM 1 comment:

The famous doctor who extricated an American man from a towel that had absorbed him was suddenly hit by amnesia as he was preparing for a press conference about the procedure's success. When asked when the patient would be presented to the public, Dr. Reginald Gamma began to cough in a fake way, as if stalling for time. Then he pulled a long handkercheif from his pocket and wiped his forehead and confessed, "I don't know who I am!"

Members of the press laughed, until a spokesman for the hospital pointed out that Dr. Gamma never made jokes and that the press conference was over.
Posted by bluegreenplant at 11:47 AM No comments:

Hecot Smithly, the man who was absorbed by a towel and recently excreted by the same towel with the help of a famous doctor, has announced through a spokesperson that he will be granting a press conference with his doctor, and the cleaning woman who saved his life when he was part of the towel.
Posted by bluegreenplant at 11:40 AM No comments:

"All indications are that the operation to separate the man from the towel he was absorbed into are that it was a complete success, " stated a spokesman for Doctor Reginald Gamma of the Maldive Medical Institute and Earth's Core Studies University. The operation took place in Indiana, USA because of water intrusion problems at the MMIECSU.
Posted by bluegreenplant at 6:50 AM No comments: